Eileen Morgan, a senior at the University of Alabama, shares her service experience in Athens. We are very proud of the hard work our students put in with the Salvation Army!

So, as our service week comes to an end here in Athens and we head to Santorini I am feeling so grateful for the opportunity we had to work with the wonderful people that make up the Salvation Army staff here in Athens. Throughout this week we sorted out all of the donations that were overflowing from their basement, sorted through their storage unit, painted a mural out back where all of the children play, and set up their shop making to presentable for customers.

I was lucky enough to get to talk to Maria, who along with her husband works at the Salvation Army and helped start it in Athens. She kept saying throughout the week that we were not JUST sorting throughout clothes or we were not JUST painting a mural, we were working towards making the day of these people who need it most. Each project we worked on would make a huge difference in the eyes of the volunteers who would have been unable to do that on their own, and the citizens who utilized the donations. Maria would say each item of clothing had a story and when someone would receive it, it could make their day and put a smile on their face. What an amazing way to look at things. Instead of thinking of it as just sorting clothes into different piles depending on gender and season I would think of the person each article of clothing would go to and how it could turn their day around and make them smile through all they are going through.

Though we were only there for four days, what we were able to accomplish as a team was so amazing and I felt as though we helped the Salvation Army get organized in order to help out so many other people who are going through tough times get back on their feet. 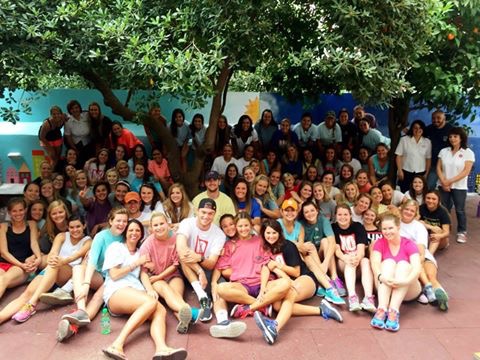